Wessobrunn-Forst (Germany), 21 January 2020 – Hans Schröder Maschinenbau uses the SamuExpo 2020 (Pordenone, 06.-08.02.2020) to present its folding machines together with its Italian partner EVOMACH. On two booth (hall 4, booth 10 and hall 2, booth 59) there will be shown three manual folders as well as one motorized folding machine that is very popular for plumber workshops but also industrial companies: the PowerBend Professional UD 3200/3,0 allows a semi-automated operation and is very gentle to the material and accurate.

The segment folding machine ASK 3 1250/1,5 is equipped with a patented eccentric quick clamping system that enables a tool change of the clamping- and the folding beam with only one single manual action. Thanks to segmented tools on all beams the ASK 3 is the machine of choice for all those who need more clearances for their complex workpieces. While this machine is suitable for workshops and the construction site, Hans Schröder Maschinenbau is also presenting the folding machine BAM 2000/0,75 which is an optimized folding machine for the construction site. The folding beam with crowning device can be adjusted for the use of a radius blade. Also for this folding beam a quick clamping system facilitates the handling. A useful detail: a cutting device incl. a linear guide. Last but not least Schröder also exhibits a manual folding machine Modular 2000/0,8 in hall 2, booth 59 that can be connected to one long folding machine in a few simple steps.

For single pieces and series

On booth 10 in hall 4 of SamuExpo EVOMACH will present the PowerBend Professional, one of the most popular Schröder machines. This machine which is used in industrial companies as well as by plumbers with larger order volumes, offers the option of an up-and-down folding beam: The possibility to carry out counter-folds without turning the sheet makes handling of large sheets easier and reduces the risk of damage.

In combination with the suction gauge, even all bends on one side can be processed automatically. The sheet is hit once against the horizontally positioned folding beam, the suction cups fix it and position it digitally controlled for the individual bends. Automation increases the machine’s usefulness in series production.At the same time it remains extremely flexible for processing small batches and individual pieces thanks to the rotating clamping beam with its second tool station. 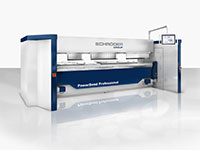